[Update: the WSOP event #1 results report from Nolan Dalla and the complete WSOP results are on Poker Player Online.] 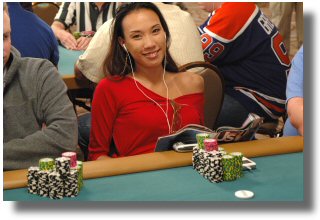 The World Series of Poker Event #2 goes into the record book as the largest poker tournament ever outside of the 2004 WSOP Championship event. The $1,500 No-limit Hold’em tournament attracted a total of 2305 entrants; 2200 started the contest at a little after 12 noon on Friday and another 105 alternates were seated within the first hour of play. The main event of the 2004 WSOP seated a total of 2,576. Late today the WSOP issued a press release announcing a change in events that have 1,500 or more players, they will now be played over three days instead of the planned two day schedule. The extra time is needed to reach finalist levels without having to play a 15-20 hour marathon session that a two day schedule demands with the large numbers of entrants. 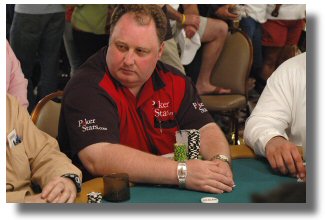 The Rio’s Pavilion Poker Room was a sea of hope and expectation today as the ‘thousands’ of players took their seats and peeked at the day’s first two hole cards. Almost everyone that is someone in the professional poker world was there to be a part of history and perhaps carry away some of the $3,180,900 prize pool. The winner is slated to receive a gold 2005 WSOP champion’s bracelet and $725,405 in prize money. The event began to a packed, standing room only crowd with every seat taken and then the attrition factor took over and the mass of humanity was constantly shrinking. Tables were being broken down and players assigned to fill empty seats in a continuous pseudo assembly line process.

Walking through the tournament area I recognized many players I’ve photographed at final tables, some receiving winner’s trophies at previous tournaments. Ted Forrest was in good shape at one of the tables after his recent PPT Championship at the Mirage. Phil Hellmuth, NBC’s National Heads-Up Champion, holding court at another table. Mike Matusow, second at Aruba, looking fit and back in top playing form was stacking chips while seated next to Mimi Tran. The 2004 reigning world champion of poker, Greg Raymer, remained in the hunt wearing the most sought after prize in all of pokerdom, a platinum WSOP World Champion bracelet. 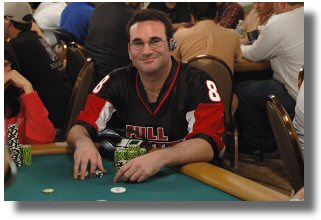 A group of influential poker bloggers was seen on the tournament floor watching one of their own, Otis of Up for Poker, compete in the tournament. Dr. Pauly of Tao of Poker and his younger brother, Derek, made the trip from New York, Maudie from Poker Perspective came from Oklahoma and other bloggers from around the country have gathered here in Las Vegas. Their presence is three fold; the annual Poker Blogger Convention, a Blogger tournament on Saturday at the Aladdin Hotel’s poker room scheduled for 10:00 am and, of course, the World Series of Poker. These people are real poker bloggers that have been writing their thoughts about the sport even before it was the fashionable thing to do, way back when only a few knew what a blogger was. This group even puts hyperlinks into their offerings, how’s that for authenticity?

The 2005 World Series of Poker is on track to become the richest sporting event in history. The combined prize pool will approach and may even top the $100 million mark and the WSOP doesn’t have even one corporate sponsor throwing any money into the prize pot. All of the prize money comes from the men and women that play the game; every dime of the record prize pools comes from event buy-in money, and that comes from the pockets of players and backers. The prize pools are limited by the number of seats available and the number of seats available is limited by the availability of trained poker dealers. The sport has grown so rapidly that the logistics to maintain the growth rate has not kept pace. All things considered, Harrah’s Rio Resort and the WSOP tournament staff have done a great job of providing a seat for everyone coming to the play in the 2005 WSOP.