06/22/05 13:35 PST UPDATE: Charlie Tuttle has passed on, my heart goes out to Jason and Charlie’s family. Dr. Pauly’s story on Charlie is up on FoxSports.com-Prof 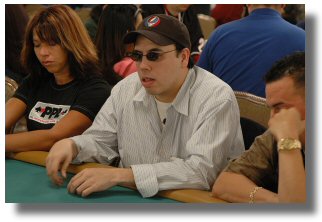 The tournament, a $1,500 buy-in No Limit Hold’em event began with the good doctor stealing a few chips in the early action. The strategy he employed was an apparent ‘folding to success varient,’ so standing around watching him was another slo-mo grass growing experience. I am usually all over the Pavilion floor with the camera recording visual evidence of poker history being made, so I would stop by Pauly’s table and fire off a few shots, then move on. After a couple of hours into the action the players at table #44 were moved into empty seats around the room and Pauly went to table seat #6, way in the back corner of the room. Little more than an hour at the new table and Dr. Pauly found Big Slick staring at him. One of the young guns called his raise and the flop brought an Ace giving Pauly top pair with top kicker. He bet and the other player raised all-in. Pauly was pot commited and called with the remainder of his chips. The kid was holding A,10o giving Pauly’s King the lead. The turn was a blank and the river was the evil Ten. The kid had made two pair and immediately started high fiving his friends while loudly touting his superior playing skills. Dr Pauly asked him one question before leaving he table, “Did you ever think I had you out-kicked?” Dr. Pauly is now back to live blogging all the WSOP action.

Wandering around the two hundred tables packed with ten thousands of players I came across Mike Matusow and Phil Hellmuth sitting side by side. What are the odds of these two drawing consecutive seat numbers out of a field of two thousand plus? While shooting some photos of the two multi-bracelet winners I listened in on the conversation which went something like this:

Mike: “I had a great night playing last night.”