[Be sure to visit the World Series of Poker live blog from Dr. Pauly. More photos are now in the 2005 WSOP Photo Gallery. Complete World Series of poker tournament results can be found at Poker Player Newspaper.] 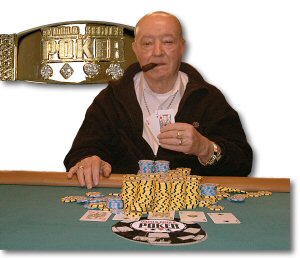 Paul “Cigar” McKinney is 80 years old and he’s been playing poker longer than the majority of WSOP participants have been alive. He has won or made the final table at tournaments in Atlantic City, Tunica, Foxwoods, and Las Vegas. Although he never won a WSOP bracelet, he’s made several final tables and has plenty of WSOP cashes. He played excellent poker for two days and survived a heads up battle that almost lasted three hours.

Anyone over the age of 50 can play in the Seniors No Limit event. 825 players bought in for $1,000 each. The 21 players who returned to day two, were competing for a prize pool of $750,750. Once play got down to the final table, an Elvis impersonator stopped by to sing a song and poker legend Oklahoma Johnny Hale gave a spectacular speech.

Here’s who made the final table:

Here are some random facts about the final table players:

Carol Bollinger was the first player busted when she moved all in with Kh-5h. Bob Hume thought about if for a few minutes and called with K-J. He flopped a Jack and Carol Bollinger could not catch up. She was eliminated in 9th place and won $15,015. Charles Zeghibe knocked out Daniel Klein. Both players moved all in on a flop of A-K-8. Zeghibe had two pair with K-8 and Klein showed A-Q. Daniel Klein won $22,525 for 8th place.

Paul McKinney began his run when his Ah-Qh doubled up against Bob Hume’s pocket Kings. McKinney caught a flush on the turn and that was a huge pot for him. Peter “The Greek” Vilandos was eliminated in 7th place. Vilandos moved all in on the flop with A-7, while Charles Zeghibe called with A-9. Vilandos’ hand did not improve and he was busted. He won $30,030.

Charlie Zeghibe was eventually knocked out in 5th place by Paul McKinney who moved all in preflop with K-K. Zeghibe showed A-4 and although he flopped a pair of fours, his hand failed to improve and he was eliminated in 5th place. He won $45,045. Robert Redman and Bob Hume were both all in preflop. Robert Redman turned over A-Q and Hume flipped over pocket Jacks. Hume’s Jacks held up and Robert Redman went home in 4th place and won $52,555.

More history was made tonight. After almost three hours of heads up play, Paul McKinney, with an unlit cigar tightly clenched in his mouth, won his first bracelet and became the oldest bracelet winner in the history of the WSOP. Bob Hume won $106,230 for his hard work. Paul McKinney won $202,725.

Although it took longer than he probably expected, it was great to see a guy like Paul McKinney finally win a WSOP bracelet.